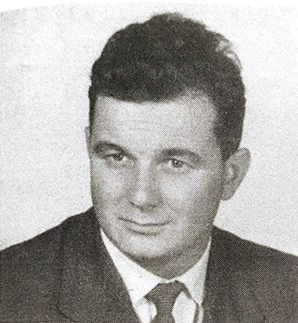 Col. Emanuel “Hlavsa” Havlík (born 22 May 1932), member of the Czechoslovak Communist Party from 10 February 1948, studied at the Faculty of International Relations in Prague from 1953-1954. He was sent to the State Institute of International Relations in Moscow in 1956. In 1960 he completed his studies and earned the title of "JUDr." From 1 August 1960 to 31 August 1961 joined Directorate II of the Ministry of the Interior as a lieutenant, then moved to the intelligence department of Section 2, where he focused on Mexico. In 1964-1969 he worked in Colombia at → the residentura in Bogota. In 1970 he became a member of the ideological commission → Main Committee of the Czechoslovak Communist Party at the Ministry of the Interior of the CSSR. In 8 March 1971 he was temporarily appointed head of → Section 36 (active and influence measures). In August 1972 he was promoted to major. On 29 December 1973 he was transferred to → Section 52 and in 1973-1977 he worked as → resident at the residentura in New York. He actively cooperated with the KGB and, during foreign missions, let himself be recruited by the CIA under the guidance of the Soviets. His work was highly rated by the KGB. In 1978 he graduated from the KGB intelligence school in Moscow and in August 1978 he was promoted to lieutenant colonel. In 1980, he completed his postgraduate studies at VUML (Night School of Marxism-Leninism) with a thesis providing a Critique of Contemporary Anti-Communist Ideology and Policy. He also examined the issue of ideological diversion

. On 1 November 1980 he was appointed 1st Deputy Chief of the Intelligence Department of the Main Directorate of the Border Patrol and Border Security. From November 1981 he was chairman of the Czechoslovak Delegation to the Czechoslovak-Austrian Commission for the Investigation of Events on Shared State Borders. From 1 December 1982, he was specially promoted to colonel. On 1 January 1985 he was temporarily appointed and from 1 September officially appointed Chief of Directorate VI of the SNB (National Security Corps), where he worked until 31 July 1988. He was finally released from service on 15 September 1990, when he retired.

See: Directorate I of the Ministry of the Interior